The HCP office and seminar building is part of the ETH campus on the Hönggerberg, a ridge five kilometres northwest of Zurich city centre. This satellite of the Swiss Federal Institute of Technology is surrounded by pastureland and extensive forests. The research and institute buildings were built in several stages from the 1970s on. The “Science City” masterplan is transforming the site into a full-fledged city neighbourhood with apartments, shops and cultural options.

The new HCP building closes off the campus site on the southern side. This 200 m-long, 20 m-wide construction traverses the slope that falls away gently from the edge of the forest in towards the road in a northwest direction. It is located in front of the large comb-like HCI building. HRS managed the project as general contractor, assuming all cost, quality and deadline guarantees.

HCP accommodates 230 workspaces and four seminar rooms. The design by Züst Gübeli Gambetti Architektur und Städtebau AG won the full-service competition organised by HRS in 2011. The HCP has the appearance of an austere functional building with a uniform façade consisting of a succession of narrow storey-high windows and closed elements of the same width. The even rhythm of the façade is offset by one element on each storey. In total, this building, which has no basement, has five storeys staggered along the slope so that there are never more than two full storeys above each other on the terrain.

The floor plan is organised in three wings ; two longitudinal corridors provide access to the room zones along the façades and encompass a central area where the four stairways, sanitary modules, service and meeting rooms are located.

Originally planned as a temporary solution, the building was finally built as a permanent, reinforced concrete skeleton structure. The concrete stairwells and individual wall panels serve to stabilise the building against earthquakes and wind. The bracing elements cannot be inserted in a basement and loads are transferred by friction and by peripheral reinforcing into the foundations. Vertica loads are passed into the subsoil by driven piles (pressure and tension). Structural engineering focussed on flexible use and the free spatial dimensioning of the office units. Some of the flat roofs can be used as terraces. The “cascade” of staggered storeys does not form an impenetrable block. In front of the courtyards of the adjacent HCP building, the upper storeys are raised to open up space for covered, 40 m-long leisure and entry zones. The free space beneath the building opens up a view towards the Limmat Valley.

As for energy, the HCP building scores points with its self-regulating heating / cooling, based on a thermoactive component system. Decentralised ventilation provides a pleasant indoor climate. 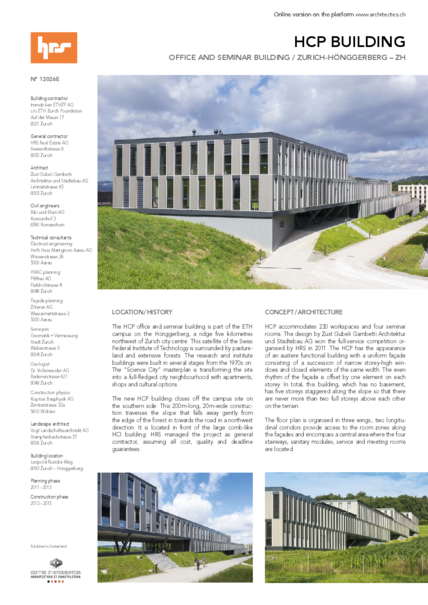