Behind the site of the Zurich Academic Sports Association (ASVZ)
opposite the Fluntern cemetery, Schweizerische Kreditanstalt (now CS) used to have its own sports ground with tennis courts, football pitches and a covered swimming pool. FIFA acquired this 44,000 m2 site in 2003 to set up an operations centre for the football association’s 200 employees. The headquarters on the Sonnenberg had become too small and the workforce had to be accommodated in five additional properties.

In addition to its excellent location on the Zürichberg (surrounded
by greenery), the good transport connections on offer also influenced FIFA’s decision to purchase this site. The terminus for tram line 6 is located just a few minutes’ walk away. Zurich airport is also no more than 30 minutes away.

The developer appointed HRS as its general contractor following a call for tender process. One of the key criteria was a fast submission process and a short construction period, if possible. HRS managed to start the building submission process just 3 months after acquiring the plot of land. There was no opposition and the project was approved within the shortest possible timeframe. Planning permission was granted in May 2004.

Given the considerable 20-m excavation depth for the six underground floors (two of which are allocated to the parking garage),  HRS engineers secured the walls of the pit laterally with 400 anchors and a total of 1400 nails.

At the core of the structure (which surrounds an open interior courtyard) are the Exco room for conferences held by the FIFA Executive Committee, the auditorium above the foyer (where the seats are grouped in such a way that all are directly accessible), the meditation and prayer room for the five world religions with a walk-in shrine made from illuminated onyx, and the office floors with fully glazed window areas. The top end of the corridors has been reserved by the architects for a cafeteria and common room areas. A bridge links the two longitudinal sides in the spacious entrance foyer, decorated with Chilean granite. The foyer serves as both an entrance area and banqueting space.

Anchoring, transparency and light are the fundamental architectural ideas behind this Home of FIFA. Strips of lighting line both the corridors and the stairways clad in Brazilian quartz shale (integrated into the glazed handrails). Light is also dominant in the lifts.

The offices are furnished so that all the employees have a window seat and can benefit from maximum daylight at any time. All of the meeting and conference rooms
at the top of the Home of FIFA also receive daylight.
For the façade, the developer and architect chose heat-insulated, extruded aluminium profiles on the exterior fronts and thermally separated post/mullion constructions on the courtyard side. The windows are triple-glazed. The mesh around the building serves as both a “shade system” to protect from the sun and
as a design element. It consists of 1.5-mm-thick horizon­tally woven aluminium wiring and vertical steel cables. The mesh is secured in place using special springs in the roof area and spacing brackets at ground floor level. The individual mesh panels are each set 2 m apart.

The Home of FIFA also includes a sports and training centre and a fitness and well-being oasis. The two storey underground garage offers parking spaces for 174 vehicles.

The FIFA building has been designed according to the Minergie standard. Geothermal probes at a depth of 320 m deliver a consistent temperature of 10°C which is concentrated via four heat pumps. The ceilings have been designed as heating and cooling systems.
On particularly hot days, the system switches on the cooling compressors. The ventilation system is based on an adiabatic process. It can transport both heat
and cold and ensures consistent temperatures in all of the rooms, regardless of the sun’s radiation. Any waste heat is sucked up with the exhaust air and reused via heat exchangers.

The short construction period required fractionated planning and careful synchronisation of all the work involved. One challenge was presented by the large
dimensions of the building. A total of 200,000 m3 of material had to be removed for the six underground floors over a period of three months. While the base of the 164 m x 46 m excavation pit bordering the Masoala Hall of Zurich Zoo was being concreted over, diggers in the south-western section were still clearing out
the soil. The ground slab was finally concreted over in full on 15 November 2004.

Lighting artist James Turrell has designed a dramatic lighting display for the building at night. It submerses the Home of FIFA in an array of alternating colours
each night with striking colour accentuation in the atriums. The goal of achieving “an architecture of the imagination” has therefore been achieved. 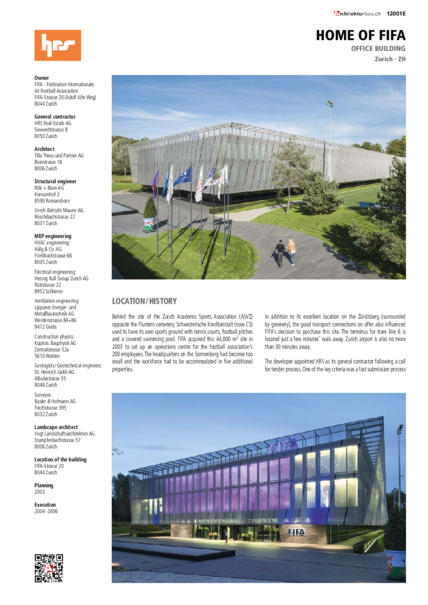