Credit Suisse, still active under the name of Schweizerische Kreditanstal(SKA) at that time, purchased the former brickyard clay pit at the foot of the Uetli hill between the Brunau and the Road Traffic Office. On this 95,000 m2 site, the honeycomb-structure Uetlihof buildind was constructed from 1976 to 1979. The six honeycombs housed 6,000 workspaces, to which a staff restaurant, an own energy production plant, and six-storey structure housing energy supply, ventilation, air conditioning and parking were added, embedded in the hollow of the former 30-metre deep clay pit.
Once the city of Zurich had revised its construction and zoning ordinance in 2003, the building contractor was able to increase the usable space on the Uetlihof site by 28,000 m2.

A feasibility study carried out in 2005 showed that it was possible to tear down the above ground part of the existing Uetlihof 2 and create an additional 2,000 fixed or 2,500 flexible workspaces in a new ten-storey building above the six-storey structure. The owner followed this proposal and decided in favour of an irregular octagon that could be seamlessly integrated into the existing honeycomb landscape and makes ideal use of the extra space. Three inner courtyards link over 6,000 m2 of floor space and provide maximum daylight.
As general contractor, HRS faced the challenge of reinforcing the structure of the six basement floors and knocking down the structure above ground without interrupting the building operations. A very specific and detailed schedule defined what had to be done when and where.
The narrow access to the construction site and its location in the inner city required the preparation of a precise construction logistics concept. Craftsmen and subcontractors had to announce their deliveries ahead of time to the construction logistics division. The project also included the erection of an additional energy unit as an extra source of supply for the trade. Its installation allowed the existing plant to be used to supply the offices. Both energy units, with a total of
six diesel engines, are arranged so that they can be switched at any time to take over the supply of the other area. The main power arrives at the sub-stations via a 10-megawatt supply line in the in-house mediumvoltage circuit.

The irregular octagon building shape that was chosen completes the six existing honeycomb structures,
however without dominating them. The result is an impressive balance between both architectonic creations, built as good as 30 years apart. Wide bands of prefab concrete facade elements emphasize the horizontality of the building.

Uetlihof 2 meets the Swiss Minergie P-ECO standard. It was designed according to the directives for a 2,000-Watt Society pursued by the City of Zurich. The windows are triple-glazed. The heat emitted by the data processing centre is fed into the heating system. The offices are heated and cooled according to the thermo-active component system (TABS). The ceilings have been constructed as cooling ceilings. Air and heat are stored between the floors. They arrive in the rooms through movable
grids at a slight overpressure, rise upwards and are then extracted into the inner window frames. Hybrid heat exchangers on the top floor supply the connected loads, in particular the data processing centre. Turbo and screw compressor cooling units guarantee constant operating temperatures. LED floor lamps meet the need for artificial lighting.

Some of the cooling and ventilation is provided by octagonal ceiling elements. These so-called ceiling “sails” that together form a “wall of leaves” can turn to allow partitions to be positioned as required.

For the first time, at Uetlihof 2, Credit Suisse implements the newly developed smart working concept. The staff’s various needs are approached within the workplace zones :
– a quiet area for concentrated working
– closed rooms for small discussions
– areas for project groups
– conventional open-plan offices
Since there are no fixed workspaces, office space is better utilised. Due to absences (external obligations, illness, vacations or military service), the 2,500 people who work in Uetlihof 2, mostly in IT, need in fact the area for 2,000 workspaces. 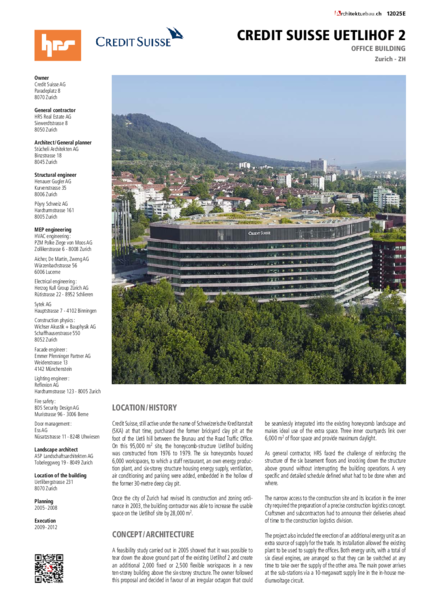