For the purpose of housing FIFA’s World Football Museum, it was necessary to remodel the Haus zur Enge, which is named after the Zurich district in which it stands. Enge is located southwest of Zurich’s city centre, bordering both the old part of town and the lake. The property closes off the south side of the Tessinerplatz where the district’s magnificent suburban station is located. The building was designed by renowned architect Werner Stücheli and completed in 1978. It is a high-rise building which rises from a two-story base and does not significantly overshadow the surrounding houses. The base part occupies an entire square space, following the course of adjacent streets and the edge of the Tessinerplatz. The upper part is significantly reduced in volume with a narrow outline. Its elongated shape, aligned north to south, is based on a 135-degree grid pattern, which also determines the layout of the individual floors.

When the decision was made to accommodate a complex room arrangement for the Federation de Football Association (FIFA) and other uses at this location, it was noticed that the robust substance of the basic building had the required potential. The building’s structure is supported by two triangular central utility cores that consistently penetrate all the storeys, holding opportunities for restructuring and consolidation, as well as an increase in volume. Nothing stood in the way of comprehensive renovation. Under these conditions, a strategy developed for dealing with buildings from the 1970s that is not particularly common.

Since the renovation, the building has housed the World Football Museum, retail space, dining areas, seminar and office space as well as 34 apartments. This mixed use now dominates the square. According to the architects, the new use of the building is an affi rmation of the principle of active participation in city life that Werner Stücheli outlined in his fi rst draft, but was unable to achieve at this location. The integration of public usage on several levels, extending to the outdoor terraces of the base structure and, in particular, the museum, seminar and restaurant activities in these areas, bring the building closer to the Tessinerplatz. They emphasize its role as part of the urban space.

The architects were able to align their interventions with the existing structure. The predetermined mixed usage, the building law requirements, and the ambition of the architects to create constructive coherence were also determining factors for the draft design. The architects formulated the aim of the reorganization, and the increased height of the high-rise part above the basefrom six to eight storeys as follows: to rediscover the lost typological and architectural values of the original project, and in addition to the urban impulses mentioned. This gives it an aesthetic appeal appropriate to its location.

The base area will now house the museum, which will extend to the fi rst two basement levels. Access to the museum entrance is orientated towards Enge Station and Tessinerplat; the projecting base level will protect it from the weather. The entrances to the offi ce space and apartments have their own addresses ; the architects integrated these into the logic and rhythm of the ground fl oor façades. The second upper fl oor is interpreted as a zone between the base and the superstructure. The restaurant and retail spaces arranged here, along with the terraces, are open to the public. Access to these businesses outside museum opening hours is provided by an outdoor staircase; the main entrance. Above this, up to the 7th fl oor following the X-shaped 135-degree pattern of the building, the residential uses have been arranged to the north and south, and the offi ce areas to the west and east. The distinct, horizontal edging over the last fl oor of the original building has been preserved as the actual building form. The two new fl oors above are slightly setback and reproduce the basic shape, in simplifi ed form, without the striking corner formations. They contain additional apartments.

This conversion is a reinterpretation of the original concept. Materialization played an important role. Base and superstructure have uniform materials and colours. Their new outer cladding is made of dark, ceramic, aubergine-coloured graduated tiles. With these, the architects wanted to give the building an upmarket look. The new window casings stand out from the ceramic cladding, giving the façade a new plasticity with an interesting play of shadows. The new roof structure is discreet, in contrast. The building envelope has a light-coloured appearance consisting of pure aluminium and glass. With horizontal bands and rhythmically modulated window casings, its appearance indicates the underlying residential use. Uniform sun protection, in the form of electrical curtains behind glass, ties in with the colour of the ceramic tiles.

HRS as general contractor completed this project on time. The task was challenging, having to be handled in a densely populated inner-city neighbourhood. The existing building made high demands in terms of geometry and workmanship. The project team had to deal with a rolling planning schedule and an extremely short construction time. In terms of logistics, the complex programme was anything but a walk in the park: at all times there were 380 to 460 people working on the construction site.

In the renovation of the building and the addition of storeys, as well as in the field of building technology, the latest energy concepts were taken into account and implemented for the extensions and the façade. The building is connected to Lake Zurich by underground pipes. Lake water is used as a renewable energy source to heat the building in winter and to cool it in summer. Thanks to this solution, all the roof surfaces could be made available to users. 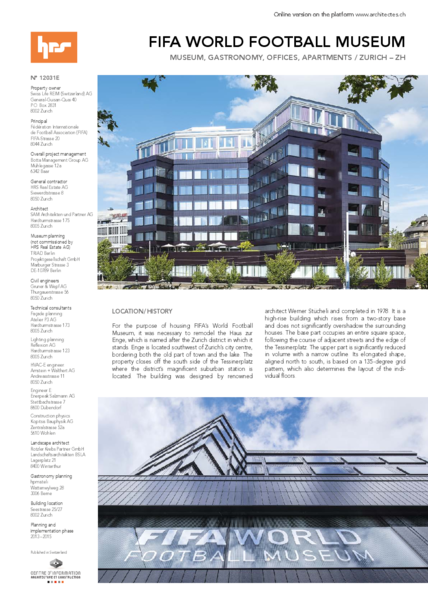