The first building Tamedia (then still the Tages-Anzeiger für Stadt und Kanton Zürich AG) moved into in 1902 was located on the Werdareal site in Zurich’s district of Aussersihl. Over the course of time, the publishing house’s portfolio of buildings increased to include countless additions of varying styles, which gradually occupied large parts of a block of buildings. It now comprises an entire row on Stauffacherquai along the River Sihl. The seven-storey new build by Japanese architect Shigeru Ban was born out of the company’s desire to integrate workplaces from various other locations on the Werdareal site as well. It is located on the northern corner of the block, tapering into a sharp angle, where Werdstrasse leads into Stauffacherquai. At this exposed site, it is prominent from both the other side of the river and from the historic exit route out of the city towards the west. The new building provides high-quality workplaces for about 480 employees of the
20 Minuten and Tages-Anzeiger newspapers and other media owned by the company.

The facades of the generously glazed building, which has a mansard roof, follow the style of Werdstrasse and Stauffacherquai in the manner of a classic perimeter block development. Similar to the buildings from the Gründerzeit era, the building corner is sloping and accommodates the main entrance. The new building matches the shape and dimensions of the architecture of the district and respects the district’s standard building height and raised ground floor, as is traditional in the region.


On the other hand, the construction is new and extraordinary. The multi-storey townhouse has a timber frame construction. This organic, renewable building material is used for the supports and beams as well as the joint connections, which deflect the vertical loads. The supporting structure remains visible and has been left in its natural state. The spruce wood that has been used is of a very high quality and comes from a contiguous forest region at a height of over 1,000 m above sea level.


The main section of the timber frame construction consists of eight axes, each with four supports and ten horizontal beams with an axis spacing of 5.45 m. Each triple block-glued support is approx. 21 m high and measures 440/440 mm in the cross section. The supports all end at the roof of the top floor. The horizontal beams slot into an oval beech veneer dowel, which in turn sits flush in the oval notch of the support. A rigid framework forms the roof truss over a span of approx. 18 m. The majority of the more than 1,400 timber structure elements are individual parts due to the complexity of the building. To coordinate the various trades, the architects released the contractor’s plans in a three-stage system.


The glass facade is made from an external layer, triple glazing and an inner glass layer. There is a cavity measuring approx. 3 m between them. This serves as a buffer against the weather. From the ground floor to the fourth storey, a cascade staircase runs across this intermediate space, in which two to three lounges are provided on each floor from the first to the fifth. In these lounges, the external facade is made up of narrow, bay-wide glass lamella, so-called glass shutters, a special construction that can be raised over one or two storeys and converts the lounges into recessed balconies. The intermediate space is also used as an air exhaust duct, which leads the heated air to the heat exchanger in the attic.


In addition to the new build, the brief given to architect Shigeru Ban also included extending the neighbouring building on Stauffacherquai by two more floors. This was also done using timber – in a “natural” continuation of the new build, but also architecturally adjusted to its base.

The logistics alone of the building site in the centre of Zurich were a major challenge for those involved. The preliminary work for the gigantic timber construction lasted three years. Collaborating with an internationally active, foreign architect was also a demanding task. A concept had to be developed for fire protection, which catered to the particulars of the building. To compensate for the deviations from normal regulations, a number of measures were incorporated into the concept in agreement with the fire authorities, such as inherent sprinkler protection, fire alarm surveillance of offices, stairwells, corridors, plant rooms and the atrium in the entrance zone, and the El 30 class design of the internal glazing.

A ventilation and air-conditioning system provides a comfortable room climate and allows the building to achieve the standard of a low-energy building. A groundwater heating pump provides the necessary heating and cooling energy. It is distributed via cooling panels in the ceilings and fan coil units. A computer controls the building’s shading. 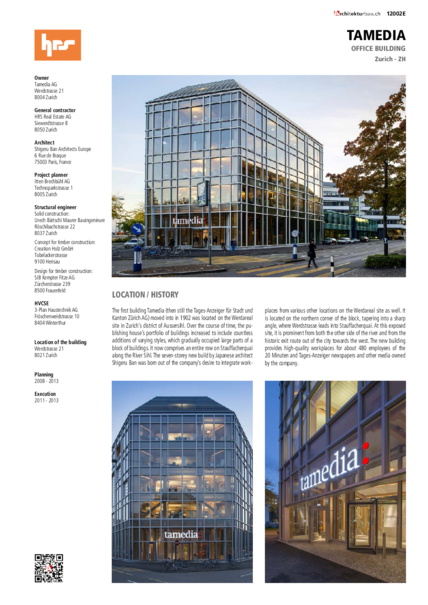