Basel is considered the most important exhibition site in Switzerland, and one of the most significant in Europe. The largest watch and jewellery show in the world, BASELWORLD, and ART BASEL, an internationally renowned trade fair for contemporary art, provide Messe Basel with global publicity. In Switzerland, Basel is known for holding muba, Swissbau and the gastronomy trade fair, Igeho. Parts of the Autumn Fair, the largest and oldest amusement fair in Switzerland, also take place at Messe Basel. The exhibition grounds are located in the centre of the city, are very easy to reach with both public and private transport, and offer an exhibition area of 141,000 m2, of which 83,000m2 are suitable for multi-storey stand constructions.

Eventually BASELWORLD in particular required more space and more modern infrastructure. So in 2005, the MCH Group, to which Messe Basel belongs, began planning new and larger exhibition halls. With a clear Yes vote three years later, the voters of the canton of Basel-Stadt agreed to a new exhibition centre. In 2008, HRS Real Estate AG was tasked with optimising the project and in autumn 2009, they were awarded general contractor status.

Two aged building complexes were demolished and replaced by a new build measuring 220 metres in length, 90 metres in width and 32 metres in height. Large bored piles were inserted into the ground to provide the foundations of the load-bearing supports. The core buildings and basements are made of reinforced concrete, while the hall ceilings are steel/concrete composite structures. The basements were connected by a tunnel.

The two upper floors now span part of the exhibition site. This has considerably enlarged exhibition space, providing the grounds with more flexibility and comfort. In the eight- to ten-metre-high halls, exhibitors can even erect multi-storey stands. The multi-functional event hall with 2,500 places, located south of the exhibition site, is also part of the new exhibition centre building and connects to the Congress Center Basel via a new skywalk.

The new building, which was designed by renowned Basel-based architecture office Herzog & de Meuron, combines functionality and aesthetics in an almost perfect way. The upper part of the building consists of two hall structures, positioned on top of each other and projecting outwards over the street to varying extents. The ground floor is predominantly glazed to achieve spatial transparency as well as the intended opening of the hall complex and a dynamisation of public life.

The two hall floors are closed entities and are displaced against each other in such a way that they are perceived as separate units.

Twisting the facade of the ground floor reinforced the architectural differentiation. The cladding of the top storeys looks like a fabric woven from metal strips and is made from individually bolted aluminium elements, some of which have been positioned so that wave-like clusters allow views from the halls over the cityscape.

The “City Lounge” is a central architectural element – a covered public space with a tram stop. This not only marks the entrance to trade fairs and the event hall, it has also become a focal point of public life. In the middle of the “City Lounge”, fascinated visitors look through a circular opening that reaches through both top floors. This atrium – “a window to heaven”, as the architects call it – makes the new build an impressive visiting card.

The building of the new exhibition grounds in Basel is the largest construction project that HRS Real Estate AG has realised to date. Messe Basel placed high demands on the project management as the different requirements of an exhibition centre of such dimensions are enormous. The biggest challenge was the very tight schedule. In February 2013, the new halls had to be handed over. This is due to the announcement years before that BASELWORLD would be taking place in the new halls from April 2013.

The building process had to be planned in such a way that the trade fairs and events could still be carried out without any particular restrictions. This demanded a high degree of flexibility from all involved. At peak times about 1,200 workers were on-site at the same time. The work was carried out in one and two-shift operations. Night shifts were also needed at times.

To provide just a few numbers, 1,200 concrete elements, 46,000 m2 of ceiling panels and 14,000 facade elements were installed for the new build. On average, 20 HGVs per hour were on the road for deliveries. For this reason, HRS Real Estate AG set up an interim warehouse and checkpoint for dispatching lorries at the Basel harbour.
There was virtually no space on the city-centre building site, which was surrounded by heavily trafficked roads and tram lines. For this reason, the general contractor decided on a vertical construction method and split the project into 22 stages. Using eleven stationary building cranes and an average of six mobile cranes, the construction followed a precisely defined sequence of assembly. During the building phase, one person was charged with continually updating the schedule and logistical plans.

The new exhibition centre building has a highly  thermal-insulating cladding and is connected to the district heating grid of the city of Basel. Thanks to these sustainability efforts, the Minergie certifying body of Basel-Stadt awarded the new build its own Minergie label, specially developed for this project. In addition, the target values of the SIA Standard 380/4 in terms of lighting and ventilation/air conditioning were met. The green roof is another example of the sustainable focus of the project. 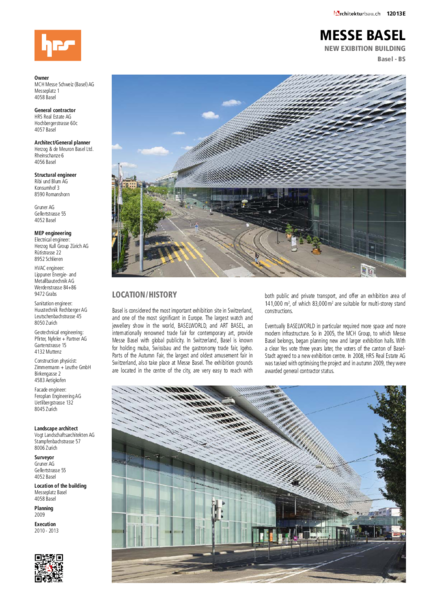