The HIB building of the Swiss Federal Institute of Technology Zurich (ETH) is known as the Arch_Tec_Lab. It is located at the ETH Zurich Hönggerberg site: an extensive complex with various institute buildings was built in different stages from the 1960s on a plateau northwest of the centre of Zurich (ZH). According to the master plan «ETH Zurich Campus Hönggerberg 2040», the former agricultural zone between two large forest areas will be developed into a complete urban district with apartments, shopping and entertainment facilities, while the teaching and research operations will retain their central role.

The Arch_Tec_Lab is an addition to the second stage of development, which was built between 1972 and 1976 for the field of construction sciences. This forms the western edge of the entire complex. The HIB building complements an ensemble consisting of a research hall (HIF) and the central main complex (HIL) of the second stage of construction. It stands on the roof of the adjoining garage (HIG), which is covered with a greened concrete slab. The new building houses the ITA (Institute for Technology and Architecture) and the Robotic Fabrication Laboratory. To a certain extent, the building sciences planned this expansion of their research and teaching landscape «in-house»: the building project was organised as an experiment. The largely digital planning and construction process lasted six years, involving architects, civil engineers, building technicians and building physicists from six professorships at the Institute of Technology in Architecture (ITA) at the ETH Zurich. Together, they wanted to explore how digital technologies and collaborative planning processes can contribute to a more resource-efficient and spatially condensed construction method. HRS Real Estate AG supervised the implementation of the project as general contractor with full cost, quality and schedule guarantee.

The Arch_Tec_Lab is a prismatic building with a fully glazed facade. It is divided into two horizontal, hall-like areas, each with a gallery. The lower room layer is used by the Robotic Fabrication Laboratory. The floor of the main hall has no joints except for the covers of some media outlets. The robots are attached to the ceiling and can be used for separate tasks or for coordinated work on a project. Along the south and east facades there are side rooms and a gallery.

The upper space layer cantilevers to the north, west and south. It serves as a professorship floor and is designed as a spacious hall with peripheral individual offices. At this level, a closed passageway leads into an entrance area on the ground floor of the HIL complex, which is located directly to the east. The two galleries along the long sides of the professorship floor are connected by bridges. A central staircase provides access and an escape route. Most partition walls to the side offices and meeting rooms are made of large, transparent glass panes.

The supporting structure of the Arch_Tec_Lab is a steel construction. It does not require cores and shafts, which provides for flexible floor usage and also allows the interior design to be adapted to changing requirements. Twelve double supports inserted into the existing structure of the garage hold up the corner slabs and the roof.

The roof clearly shows the creative and technical possibilities that digital building offers today. It consists of a series of five dome-like arches and is comprised of over 48,000 individual square timber beams with lengths of up to 3.10 metres. The timbers were joined together to form 168 lattice girders stretching up to a length of 14.70 metres between the curved box girders of the primary steel structure. The girders consist of 23 layers in which the straps and diagonal slats are alternately layered. A single gantry robot completely prefabricated the roof.

The basis for this was an integrated digital planning and production process developed under the direction of the Chair of Architecture and Digital Fabrication with participation by specialist planners and the timber construction company Erne as the implementing company. On the roof, 136 flatroof windows provide sufficient daylight. An ornamental canopy made of fluorescent tubes was integrated into the open supporting structure.

Like the roof, the building services concept is also a pioneering achievement of the participating ETH chairs. They wanted to manage with as few resources as possible, not only in the planning and construction phase, but the Arch_Tec_Lab should also function emission-free. The zero-emission technology developed at ETH Zurich since 2010 is used as building technology. The double-floor structure of the building contains 120 airboxes, as they are known, which are connected to the anergy network of the Hönggerberg campus. These airboxes provide ventilation and also serve to heat and cool the building. On the one hand, the double floor accommodates the cable network and on the other hand, it ensures that the air enters the rooms through floor outlets under slight overpressure.

As it is a prototype, the extremely complex building technology proved to be a special challenge for the construction team. Accordingly, intensive negotiations with the authorities had to be conducted. In the end, the concept was implemented to the complete satisfaction of all those involved.

The Arch_Tec_Lab sees itself in operation as a real laboratory, in which the researchers, together with their students, constantly approach new issues and try out solutions on site. The knowledge gained is intended to benefit the construction industry and ultimately society as a whole. 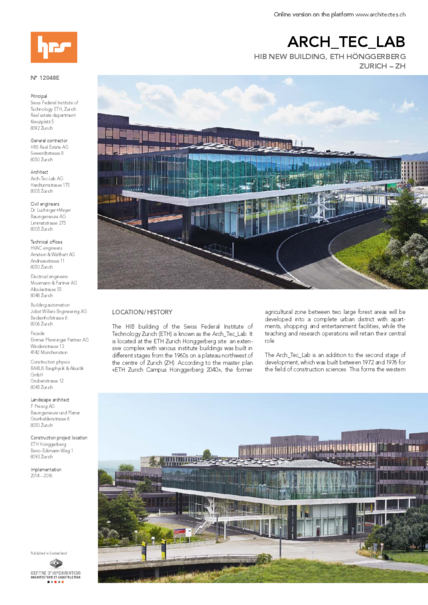