The name “Mattenhof” is a reminder of rural past of the village of Schwamendingen that became part of the City of Zurich in 1934. The agricultural enterprise below Zürichberg hill was located directly on the north-eastern city border. After the Second World War, Schwamendingen became a large residential neighbourhood on the basis of a comprehensive zoning plan. The original Mattenhof farm gave way to the terraced houses of the residential cooperation Sunnige Hof. The neighbourhood’s remoteness came to an end in 1990 with the completion of the Stettbach S-Bahn station, which is right next to the Mattenhof complex and means that the centre of Zurich is only a few minutes away via the Zürichberg tunnel.

The new complex replaces the 134 terraced houses and kindergarten dating back to the 1940s with 377 new units of various sizes. This redensification was in line with the desire to preserve the quality of the former garden city character. The requirements were a relaxed development, generously-proportioned green areas within the residential complex and attractive meeting zones.

The study contract process in 2010 awarded the project to Bachelard Wagner Architekten. This project takes up the concise, linear building orientation of the original settlement in terms of urban developments. The character of the grass strips running across the gentle slope towards the north, bordered by the rows of houses, remains recognisable. Densification is achieved by the thoughtful addition of a larger apartment building.

The new buildings offer a combination of different types of apartments and buildings. Terraced houses interweave with multi-storey apartment buildings, supported by the combination of complementary exterior spaces. The shape and cubage of the new buildings is subject to clear typological principals: two-sided apartment orientation, bathrooms with natural light, the best possible orientation of the generous loggias and balconies. These rules allow an enormous diversity and variability of building depths in the floor plan, which are in turn reflected in characterful volumes.

To the east, towards the S-Bahn station, the complex is closed off by a seven-storey block. Its volumes are structured by lateral offsets, stepped heights following the gradient and projecting loggias. The largest building in the complex is served by four staircases, each with four apartments per floor. Three double and two single rows follow along Dübendorfstrasse on the southern slope-side of the complex. On the double rows, end buildings shut off the southern ends. The two-storey terraced house units merge into five- and seven-storey volumes with apartments at the northern end of the row. They are divided into two parts by way of differing heights and offsets and each links a double and a single row in a S-shape on the floor plan. At the western end of the plot, this occurs by way of a two-storey building facing onto Dübendorfstrasse with a group practice on the ground floor and hotel rooms above. This is also where the common parking garage is accessed.

Three free-standing seven- and five-storey offset and staggered pairs of buildings form the northern edge of the complex. They stretch along a promenade-like outdoor space, which they border with the opposing buildings of the same height across the way at the end of the row. This pedestrian main access road is also edged with shops, communal facilities and practices. It is the heart and meeting place of the complex. The kindergarten and the crèche have space on the ground floors of two of the free-standing apartment buildings and their two playgrounds are on the northern edge.

HRS Real Estate AG carried out the project as total contractor in two stages. 41 terraced houses were preserved during the construction period and remained inhabited. One particular challenge, besides the tight schedule, was the two-faced masonry. The clinker brick building shell is the hallmark of the new settlement. Using this material in such large quantities, as well as the offsetting of concrete elements for the loggias and balconies, required a high level of organizational and technical skills. Equipping various service areas such as offices, a hairdresser, a gym, a laundry, a kindergarten and a crèche was also no ordinary task.

All buildings are Minergie-certified (ZH-7367-ZH-7409) and equipped with comfort ventilation. Heating is provided by the Zurich district heating network. Photovoltaic installations are installed on the buildings. 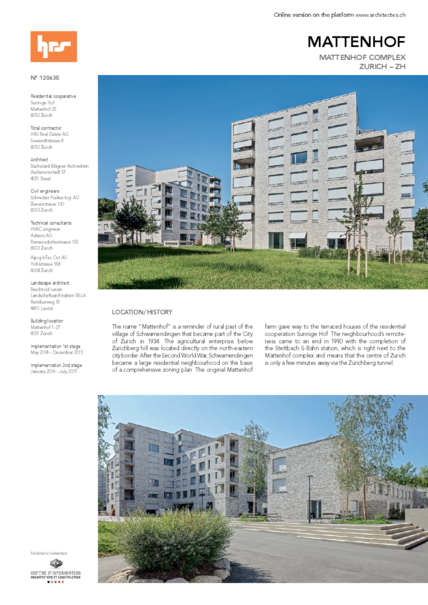