The Europaallee planning area extends southwest of
Zurich’s main railway station along the tracks. It extends
as far as Langstrasse that passes underneath. To the south, the level terrain is bordered by the Lagerstrasse. Until the beginning of this century, it formed part of the station area and, among other things, served as a transfer point for the postal service. Projects for a new building next to, and also above the tracks, were developed for about 30 years. In 2004, landowner SBB (Swiss Federal Railways) finally submitted a design that was approved by Zurich voters in 2006 and subsequently implemented.

The layout divides the 600-meter-long strip of land, into eight block-shaped building plots, which narrows towards the northwest. These form narrow alleys and sightlines that link up transversely with existing neighbourhood streets. In the
longitudinal direction, Europaallee, which lends its name to the development, crosses the eastern, wider half of the new urban district. It begins with a funnel-like narrowing by the road along the bank of the River Sihl and ends at the Gustav-Gull-Platz, where the new city axis meets the Lagerstrasse. Polygonal Construction Site G borders this
car-free space, into which a ground-level geometric pond is integrated. On the other side of the plot, the construction site is adjacent to the listed, reinforced concrete signal box that welcomes train passengers as they approach Zurich.

The architecture for the development of Construction Site G resulted from a project competition with prior prequalification. The building to be planned had to comply with the principal’s overall objective for the entire district: the creation of an urban space of high social, urbanistic and architectural, economic and environmental quality, identity and functionality. Therefore, in terms of volumetrics and shape, it reveals similarities to the buildings on adjacent
construction sites: a base building following the contours of the construction site, surrounding a small courtyard that is partly at street level and partly at first-floor level. Towers rise from this base, at two of the corners, each with an irregular pentagonal footprint. The 17-storey Gull Tower in the southeast corner, at about 61 meters – the tallest in Europaallee, forms a “cluster” with the two towers on adjacent building plots. This high-rise group also makes the central point of the planning area and the Gustav-Gull-Platz recognisable even at a distance. The second, 13-storey tower of the building complex is located diagonally opposite, in the northwest corner. The height of the base construction varies between these towers. To the south, it has five storeys, but only three to the north. Construction Site G has no fewer than twelve house numbers on Tellstrasse, Robert-Stephenson-Weg, Lagerstrasse and Gustav-Gull-Platz.

The high-ceilinged ground floor is located above a two-storey underground carparking garage and has a public character. It includes shops and restaurants. The façade is partially set back into the building to create a colonnade. In one section on Gustav-Gull-Platz, this extends over two
floors. Offices, condominiums and residential rental properties are located on the upper floors. The base mainly houses office space, but also the care facilities for the
residence and some of its apartments. The Gull Tower offers 46 condominiums of varying sizes, which are serviced via a central core and feature corner areas designed as loggias. The somewhat smaller Residence Tower is located opposite. As the name suggests, it consists of the residential accommodation. Access and the design of the corners are similar, but the Residence Tower units are smaller.

The sloping roofs of the towers are a landmark of Construction Site G. From a distance, they look like traditional hip roofs. Due to the irregular contours of the highrise buildings, the slopes do not end in a ridge, but surround a flat roof edge. The Gull Tower has two two-storey penthouses each with private elevator, higher ceilings and integral terrace. In the Residence Tower, this space is used as a spa area. Roof flaps can be opened hydraulically/electrically in these sloping sections to give access for cleaning the façade. The cleaning platform
on the roof deck can thus travel around the entire tower. The façade has the appearance of a regular, horizontally oriented grid of ledges and vertical ribs. It defines the
storey-high surfaces, divided into a balustrade and a window part, on all sides. The corners are accentuated as continuously recessed profiles. The façade has a uniformly
bronze-coloured finish. Specially perforated, corrugated and anodized aluminium sheets serve as parapet cladding and sun protection elements. Drainage for the building envelope is concealed.

HRS Real Estate AG Zurich managed the project as general contractor with full warranty for cost, quality and schedule and punctual handover. The company was honoured with the SBB Supplier Award 2015 for outstanding service. Construction Site G is now a prestigious building finished to a high standard. It was built in concrete frame construction, some parapets are prestressed. Slender, highly reinforced columns were used with the towers raised as shell
constructions without scaffolding. High ceilings and the production of movable ceiling connections on all walls required technically and aesthetically precise work. The roof
greening on the base building was both unusual and challenging.

The flat roofs are organised into numerous triangles sloping towards each other. This gives the impression of an abstract work of art when viewed from the towers. The greening aimed to reinforce this with colours and textures that stand out from each other. The complex is certified to Minergie
ECO Standard. Heating and hot water requirements are covered 100 per cent by district heating. The roofs of both towers are equipped on their south sides with photovoltaic systems. 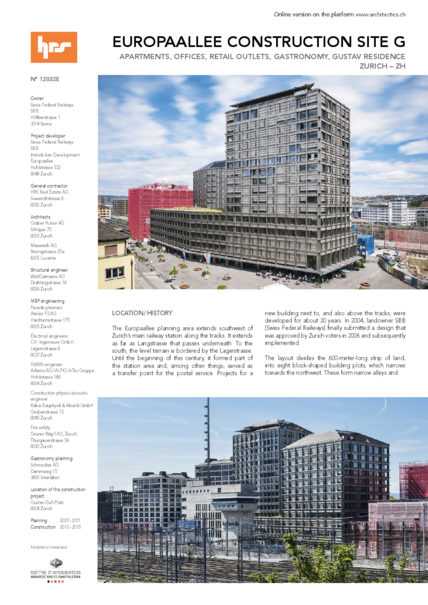